Abet Laminati takes part in a new exhibition dedicated to Marco Zanuso and Alessandro Mendini, two important protagonists from the world of architecture and design.

The exhibition, curated by Pierluigi Nicolin, Gaia Piccarolo, Nina Bassoli and Maite García Sanchis, is hosted by the ADI Design Museum, Milan and running from 8th March to 12th June 2022.

The exhibition highlights the design skills of both and their way of looking at the world: two different but both complete and complementary points of view.

For this event, Abet Laminati has loaned two of the extraordinary wooden models – the Groninger Museum in the Netherlands and the Tower of Paradise in Hiroshima, Japan – which accurately reproduce Atelier Mendini’s public and private architectures.

Abet Laminati collaborated closely with the Mendini brothers for almost fifty years. Since its foundation, the Bra-based company has always been able to work with the world of design and architecture, supporting artistic movements and stylistic revolutions that have strongly influenced the history of Italian design, as was the case at the end of the 1970s with Studio Alchimia, the post-radical avant-garde group which included Alessandro Mendini.

From that time, the collaboration between Abet Laminati and Atelier Mendini has never stopped, creating furnishings, collections and great architectural projects in which laminate plays a primary role and able to express what should have been „a free and continuous movement of thought“. (Manifesto of Alchimia, Alessandro Mendini, 1984). 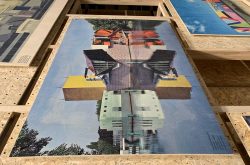